March is often celebrated as International Women’s Month with March 8 officially declared as International Women’s Day to shine the light on the different issues and inequalities women around the world face. This year’s theme is aptly described as “An equal world is an enabled world”, a fitting line to describe the various inequalities that women experience around the world and the need for us to acknowledge and work towards dismantling the structures of inequalities that exist.

According to the Food & Agriculture Organization (FAO), women are responsible for half of the world’s food production. In most developing countries, women produce between 40-80% of food, and are central stewards of seeds and agricultural biodiversity. They play a transformative role in agricultural development, and help to ensure food security. However, their contribution is often undervalued and they face a myriad of challenges in their role as food producers.

In 2017, the International Labour Organization (ILO) released a World Employment and Social Outlook: Trends for Women stated that women tend to spend around 2.5 times more time on unpaid care and domestic work than men. Further, the amount of time devoted to unpaid care work is negatively correlated with female labour force participation. According to the United Nations Research Institute for Social Development, unpaid care work is essential to the functioning of the economy, but often goes uncounted and unrecognized. It is estimated that if women’s unpaid work were assigned a monetary value, it would constitute between 10 percent and 39 percent of Gross Domestic Product (GDP).

The Climate Crisis and Indigenous Women

Over the years, climate change represents the most serious, most pervasive environmental threat that the world faces. In fact, more recently, activists have regarded this as a climate crisis - a convergence of humanity’s improvident past, its difficult present, and its uncertain future brewing into one of the world’s biggest challenges: a “perfect storm.” However, the issues are not merely scientific; climate change spans across political, social, and economic dimensions, and is considered a transnational, and an intergenerational issue. Experts predict that the climate crisis will aggravate the complex problems of development that we struggle with today like poverty, food security, and water availability and threaten to ignite large-scale political and social upheavals.

Among the key sectors that are disproportionately impacted by climate change are Indigenous Women who have close ties with nature in various aspects - socially, culturally and economically. It is estimated that 370 Million Indigenous Peoples live around the globe with 70% living in Asia and more than half are Indigenous Women. Despite their negligible contribution to climate change, Southeast Asian countries like Cambodia, Vietnam, Laos and Myanmar are very vulnerable to the effects of climate change.

The changing climate is impacting Indigenous Women and the natural resources they depend upon.  Despite this, the reality is that they hold invaluable Traditional Ecological Knowledge that is key in minimizing the impacts of extreme weather events, slow onset impacts caused by a changing climate. They hold close relationships with the land and natural resources on which their livelihoods - agriculture, forestry, pastoralism, and foraging - are mostly dependent on.

It is this dark reality that the recently concluded Silver Linings Project’s conference entitled Climate Smart Women Connect: Transforming Gender Relations through Climate Adaptation Networks tried to address. Funded by the Stockholm Environment Institute (SEI) and Global Affairs Canada (GAC), this multi-stakeholder project envisioned to recognize the vital role of Indigenous Women as knowledge holders in climate change adaptation practices and sought to dig deeper into the gaps in policies and practices of various stakeholders and duty bearers in this nexus.

Through this project, four research reports that zoomed into the impacts of climate change to Indigenous Women in four Southeast Asian countries: Laos, Cambodia, Myanmar, and Vietnam were produced. The reports found that the impacts of climate change to Indigenous Women are doubled compared to Indigenous Men. This can be attributed to “gendered social norms and expectations like housework and care work that fall on women’s duties including the day to day maintenance of crops, livestock, water fetching, weaving, domestic duties and other tasks that are considered “less important”. However, men’s roles of hunting, chopping trees, and plowing the fields are not affected by climate change to the same degree.”

Further, the four country-based researches revealed that Indigenous Women, considered as cultural managers of food supply and livestock care, are forced to seek new ways of managing these resources that increase their time-poverty. This is exacerbated because of the gendered norm practices in some Indigenous Communities - the men migrate to work out of their villages, which affects women's workload. Consequently, Indigenous Women’s participation in community activities is limited which reduces their power and participation and prevents them from holding decision making roles in their communities and in their households despite the fact that they are the chief knowledge holders of local agricultural practices.

The report also found that due to the lack of economic diversity in these remote communities in Southeast Asia, Indigenous Women are particularly vulnerable to changes in their employment. When crops are destroyed, there are few alternative livelihoods available and they face discrimination in land access, water, markets, technology, education and credit that would signal equality. Further, “food security, income and livelihood options are becoming limited, leading Indigenous Women and girls to migrate, increasing their exposure and risk of being exploited, discriminated and trafficked.”

In time for the United Nations Framework Convention on Climate Change (UNFCCC) 25th  Conference of the Parties (COP 25) held in Madrid, Spain, Cuso International and the Asian Indigenous Peoples’ Pact (AIPP), held a three-day conference in Bangkok, Thailand which gathered the various stakeholders to hear the voices of Indigenous Women themselves affected by climate change. The three-day event gave Indigenous Women an opportunity to share their expertise and to make their voices heard with regional and national government representatives and other key stakeholders.

So how can we chart a climate-resilient future for Indigenous Women?

It is said that 80% of the remaining global biodiversity is within the lands of Indigenous Peoples who have protected them over generations. As chief knowledge holders on our natural resources, they have a unique role to play in ensuring that this Indigenous Knowledge is preserved, adapted, and is passed on to future generations. We need to recognize their rights over natural resources and harness the climate change solutions that they are offering instead of getting trapped into greenwashing of the extractive industry and the large-scale agri-food corporations. Over the years, governments have been lured into stop-gap measures that seek to minimize the impact of climate change like large-scale plantations in guise of climate-smart agriculture, conservation area declarations, hydro dam construction, among others. However, they are false solutions which have resulted in Indigenous Peoples losing their access to customary land, territories and natural resources.

The Paris Agreement on Climate Change recognized the importance of working with Indigenous Peoples in adapting and mitigating the effects of climate change through the use of traditional knowledge. Similarly, at UNFCCC COP 23 in Bonn, Parties adopted the Gender Action Plan (GAP) to support the implementation of gender-related decisions and mandates under the UNFCCC process. The intersectional approach within UNFCCC decisions, different international mechanisms and global and regional frameworks in the UN and in the Association of Southeast Asian Nations (ASEAN) somehow have opened up the space for Indigenous Women’s participation. However, efforts are still lacking. For one, gender analysis should be integral to the appraisal of public policies designed to reduce carbon emissions but at the same time enabling just transitions and adaptation efforts from the ground.

Decolonisation of knowledge and the way we do development in the non-profit sector and intergovernmental organizations is a must if we want to deepen our role as enablers of equality and justice for Indigenous Women in a changing climate. We need to decolonize our thinking from long-held beliefs and assumptions, theories of change which further exacerbate inequality and include gendered policies into the strategic thinking in our organizations.

For both local and international non-governmental organizations, refraining from doing collective introspections on the way they do development will exclude Indigenous Women from their programmatic interventions. As a result, it will also create gaps in policy making decisions in the various spaces where they can use their influencing leverages.

As development practitioners and social justice activists, we need to develop platforms that will enable this local knowledge to thrive and to dominate the mainstream narrative and discourse.

The challenges are daunting. However, it is not too late to chart a different course for Indigenous Women. We need to put everyone to work now on finding solutions that will not only help us mitigate and adapt to climate change, but will also reduce inequality, lift people out of poverty, and build trust in international cooperation. As development workers, we need to ensure that gender justice for Indigenous Women is recognized in all facets of this climate crisis.

There can be no climate justice without gender justice. We must nurture an equal world where Indigenous Women are able to thrive in this time of a ‘new normal’. 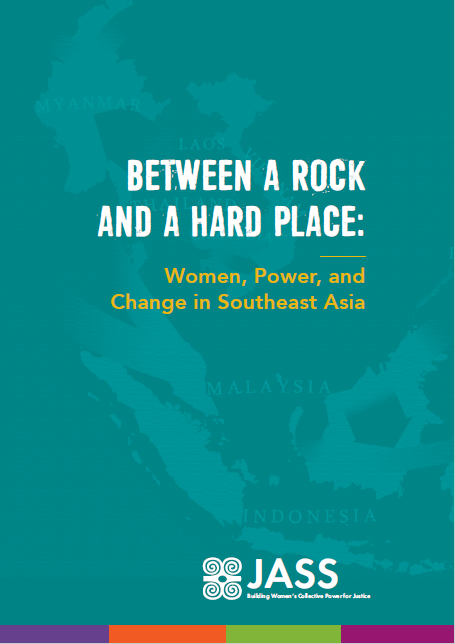 Between a Rock and a Hard Place: Women, Power, and Change in Southeast Asia

A vital part of this report in Southeast Asia involves showing the ways that ordinary people, activists, human rights defenders, and social movements are organizing to protect their communities from destruction and injustice. Some of the most vocal and active participants are women from the most affected communities in the region.

Rethinking the Mobility (and Immobility) of Queer Rights in Southeast Asia: A Provocation

While all human beings are deemed born automatically free with equal rights, the very definition of human itself in practice is not always neutral.​
By Hendri Yulius

Report
Visibility and acceptance of lesbians, gays, bisexual, transgender and intersex people (LGBTI) in Southeast Asia have grown in recent years even though some countries continue to criminalise same-sex relations or individuals with different gender expressions. From Myanmar to Indonesia to Timor Leste, even the most difficult environments have given birth to stories of love, hope and humanity. In this report, APCOM sums up the conditions and recent progress for LGBTI in each country and highlights the strategies that have helped to advocate for change.
By APCOM Foundation